In a previous post I talked about how making retro 8-bit games is a great way for fledgling developers to learn new things whilst expanding their portfolio.

I recently gave it a go myself, making a small RPG combat game called "Wolfhunter".

I spent two weekends on the project, which—despite my prior experience in games development—still managed to surprise me with some interesting challenges. 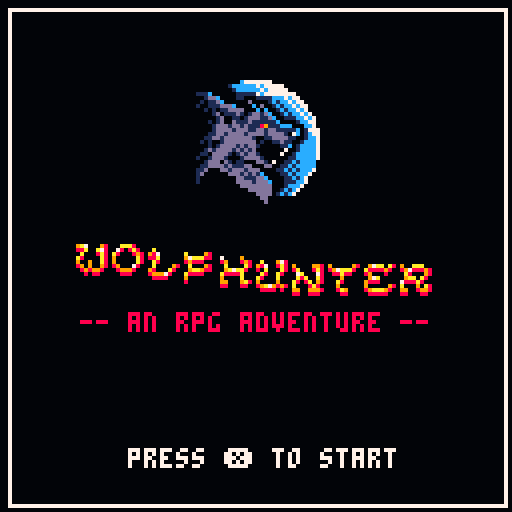 Wolfhunter is an 8-bit RPG where you play as a hunter facing off against a werewolf, in a Pokemon-like combat sequence.

You have magic spells and single-use items at your disposal, but the wolf is very powerful. The only way to kill it is to weaken it with your attacks, then finish it off with a silver-knife (which you only have one shot at).

It is made with PICO-8, and can be played directly in your browser here.

The motif and design of the game was based on the word "Moonshot", which was the theme of GitHub's GameOff 2020 game jam.

I set out to make a game loop that felt similar to the combat in Pokemon Red/Blue, which was the most popular title on the original Nintendo Gameboy.

The characters stand opposite each other, and take turns to fight. There's a bunch of other mechanics too, like strengths/weaknesses, status effects, and switching characters. Here's a scene from it:

For Wolfhunter, I copied the scene layout, the turn based fighting, and the status effects. I didn't have a chance to implement other aspects of Pokemon — so instead I doubled down on the mechanics I did implement.

The units take turns to fight. The game ends when one of the character's HP is reduced to 0.

Each turn, the player has two basic abilities that can be used for free.

The basic abilities were good to establish some baseline gameplay, but not enough to be interesting. I also added '"magic", which costs 1 mana to use (you start with 5 mana, and cannot cast spells if you run out).

Magic is more powerful than just attacking or defending, but are in limited supply, and designed to interact/react against enemy abilities.

Items are even more powerful than magic, but only have 1 use per fight.

Finally, to tie the gameplay together, the enemy must interact well with the player's abilities, and provide some kind of strategic challenge.

These enemy is strong, but the player has ways to mitigate each of its threats. Pretty much the point of the entire game here is figuring out what move to use next.

From an implementation standpoint, the most important part of the game is the "event sequence". This system will control how the game flows, and sets the framework for everything else to follow.

I define an "event" as something atomic that happens in the game. It usually displays some description to the player, and requires the player to acknowledge. Examples:

This is pretty much the back-bone of a turn-based system. Everything in the game—from the menu selection, to mana consumption, to damage/block resolution—can be modelled with events.

And in this game, events are always sequential and happening in order. But new events can be added in the middle of the sequence—for example if an attack is blocked, we need a "block" event to resolve.

This is pretty much a linked list, and that's how I implemented it. The events are the nodes. Additionally, when each event resolves, it can modify the nodes directly ahead of it, or at the tail of the list.

This is pretty much a linked list implementation. We start it off with an new_info_event (display some text to the player) that says "it's your turn to move."

The head of the sequence is the event we are currently processing in the game.

Here's an example of an event that causes damage to a unit (character). The action is an anonymous function that executes once, when the event is processed.

This includes playing sound effects, animations, and actually modifying the HP values. In this case, if at run-time the damage causes a unit to die, then a new_end_combat_event is added to the sequence, along with a new_info_event to display some informative text to the player.

In the _update() function of the game, we process the head event and show the appropriate information. Special event types, like menu will control what UI is shown.

Some events (auto) will be processed immediately—but most will require interaction from the player to progress.

I think items and magic are an interesting one. Instead of being their own event types, I think it was a good chance to apply the decorator pattern.

That's because items and magic can be thought of as regular abilities—wrapped with some extra conditions!

Namely—we want to wrap the concept of mana consumption onto magic, and single-use onto items. Aside from those things, they still do anything else an ability can do. So what I'm after here, is a function that can take in an ability (an arbitrary event), and turn it into a magic spell, or an item.

Consider we have this 'heal' event. As is, this will recover 35 HP, and doesn't have any other cost or conditions associated with it.

Now, I have a decorator function, which accepts an event, and adds mana usage to it.

Now I can wrap my heal event with as_spell and turn it into a magic spell!

PICO-8 doesn't really give us an animation framework. We can draw sprites at arbitrary locations and change some colour palettes, but aside from that—we're pretty much on our own.

Thankfully, in a turn-based RPG, the animations aren't very complex. I have 'units' on two corners of the screen, and they flicker and bounce around a bit when hit.

To achieve, this, assume we have a unit object with some x and y position—its absolute position on the screen.

I can move the unit by changing x and y, but what if I cancel an animation half way through? I don't want the animation state to be 'baked' into the unit's actual position, because it will be harder for me to reset it.

My solution was to create an 'animation' object, which keeps an independent frame count n and transformation x, y, which can be then applied to the unit at render time.

Now each update, we can also update() the animation and apply its transform to the unit. If the animation runs out of frames, it will disappear and things will be back to normal.

However, we can also just cancel the animation at any time we want, no matter what frame it is on. This gave me a lot of modular control over the animation, but also prevented any part of the animation system having an impact on the logical game state.

Here's some of the main tools/software I used for the job.

That pretty much sums up my experience of implementing RPG combat in PICO-8. Even with the lo-fi, 80's era constraints, I found that the core problems—like game design and event modelling—are still timeless.

With a bit of work, I think it'd be possible to implement a more Pokemon-like RPG in PICO-8, but probably on a smaller scale, because of the memory and size limits (I was almost at 30% capacity with just this).

At some point though, dealing with over 1,000 lines of code in a single lua run-time becomes unwieldy. So whilst something like Unity is better suited for serious projects, PICO-8 is still a great way to learn and prototype ideas.

Wolfhunter's source code is public, and you can play the game directly in the browser (both web and mobile) here.